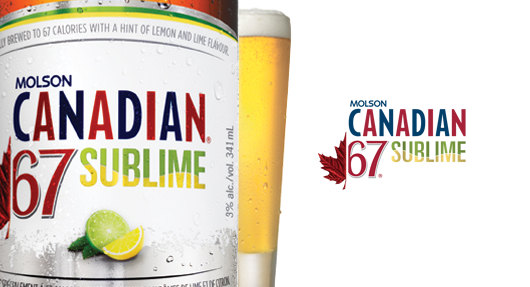 Looking for something to cool down with over these long hot summer days, why not have a beer.

Women can now enjoy a fresh refreshing glass of beer without having to worry about the amount of calories they may be piling on calories thanks to Molson. Molson Canada introduced the Molson Canadian 67 in October 2009 to balance out the beers that they currently carry.

To add to the new 67 addition Molson released a new product called Molson Canadian 67 Sublime. Their new product as described on their website is “brewed with two-row malted barley, the touch of wheat, four different varieties of hops, and a hint of natural flavours to provide the remarkably refreshing flavour combination of Lemon and Lime”.

This is great news for all the women out there who are watching their diets. There is even a calorie counter that everyone has access to that measures the amount of calories their favorite drinks have in them.

Not only did Molson understand how important it is for them to create products that goes in hand with women,  but they have also taken it a step further by expanding the 67 brand to make the drink a bit more flavourful.

On the Molson Canadian website they have a cool beer locator where you can enter your point of departure and a map will come up that shows all the locations that carry Molson Canadian.

Once you enter the point of departure you can select any location listed to be given directions to the place you want to go for a nick cold refreshing Molson drink.