McDonald’s McHappy Day is coming up on May 2, 2012 and proceeds from that day go towards The Ronald McDonald house. Charities like these are very important and you never know when you may be in a situation and need their help.

May 9, 2011 will never be a day that I forget. Of course I’ll always remember that day because it’s my son, Bronson’s, birthday, but it was also the day that our lives were turned upside down and our relationship with Toronto Sick Kids (Hospital for Sick Children) began.

On May 9, 2011 our little Bronson decided that he was going to be 2.5 weeks early and made his grand entrance into our world. I didn’t get to hold him when he was born because right away the doctor noticed that his stomach was very distended and started ordering tests and xrays. At eight hours old Bronson was being loaded into a helicopter with a team of doctors from Sick Kids and was airlifted to Toronto. We had decided to leave the hospital before Bronson left because we didn’t want to see him being taken away. However, as we drove down the 401 all of a sudden we saw the medical helicopter with our newborn baby in it fly over our vehicle. I don’t think there are words to describe how it felt seeing our baby fly away instead of being in the car with us. 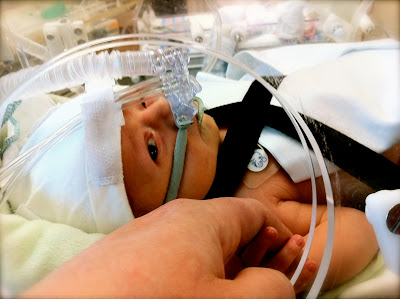 Bronson was admitted to the NICU at Sick Kids and they started doing tests to try and find out what was wrong with him. At three days old I finally got to hold my baby for the very first time. It was only for an hour but I got to hold him. I wish I had known that I wouldn’t able to hold him again until he was three weeks old because I wouldn’t have put him down that day.

At four days old a doctor walked into the room, introduced himself and said, “I’m from oncology”. I froze right there. All that went through my head was, “Did he really just say that he was from oncology? Does he have the right patient because we have a four day old baby and he certainly does not have cancer.” The oncologist went on to tell us that all of the tests pointed to the diagnosis of Stage 4S Bilateral Adrenal Neuroblastoma with metastases to the liver. Bilateral Adrenal Neuroblastoma is rare, so rare that only 45 cases have ever been recorded world wide.

The very next day Bronson was being prepped to have a liver biopsy to confirm the diagnosis. While they were getting him ready he began to have severe breathing problems and had to be intubated and put on oscillatory ventilation. (Remember the episode of Grey’s Anatomy where Karev’s intern had a baby and he was placed on a ventilator that made him shake? That’s an oscillator).

After Bronson was intubated and things calmed down we were allowed back into the room to see him. We stood there for a few minutes just watching our baby and feeling helpless. It felt like a dream. Before we even had time to process everything that had happened we were getting more bad news. Things had just turned life threatening for Bronson and the tumor in his liver was growing very quickly (it was already 4 times the size it should be) and if he started chemotherapy right away he had a small chance of making it through the weekend. Two hours later, at only five days old, Bronson began his first round of chemotherapy.

We were told that it would take 7-10 days to see the tumors shrink from the chemo. So we waited…and waited… waited. At 17 days old the tumors were no longer growing but they also hadn’t begun to shrink. We didn’t think that things could get worse until we were told that Bronson had an E.Coli infection. Not only was he fighting for his life because of cancer, now he was fighting an E.Coli infection with almost no immune system because the chemo had already killed it (his white blood cell count was 0.3). Later on that day we were faced with another hard decision. The chemo wasn’t working fast enough and there was a risk that the chemo wouldn’t work at all. After discussing our options we made the very difficult decision to allow our 17 day old baby to go through 3 days of low dose radiation therapy. I think that’s a hard decision to make for anyone but I can’t even begin to describe making that decision for your newborn. There are so many unknowns and risk factors to take into consideration. But, our oncologist believed it was the best treatment and we trusted his opinion, so we went ahead with it.

For three days I walked with the NICU transport team through the underground tunnels that connect Sick Kids to Princess Margaret. I remember walking into the radiation clinic and seeing people stare at our entourage of 2 doctors, a mysteriously covered isolette with a baby inside, and me and my husband. I’m sure that our faces said enough. While talking with the radiologist I found out that, to date, Bronson was the smallest patient they had ever done radiation on. Which I am grateful for because I wouldn’t want anyone else with a newborn to have to make any of the decisions that we had to make.

At 22 days old Bronson decided that enough was enough and he used his toes to pull out his catheter. He had never been able to pee by himself but as soon as that catheter came out he never had another problem peeing. At 24 days old Bronson pulled out half of his breathing tube and was switched over to CPAP. He knew it was time to get rid of it!

Things started to improve for Bronson and I even started asking when we could take him home. On June 15, 2011 we were told that Bronson’s cancer levels had gone from 240 (at diagnosis) down to the high 20’s. We were ecstatic with the news but, of course, then came the bad news that Bronson’s liver function was very poor and was barely functioning. 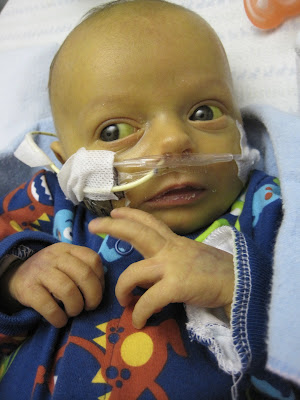 Day after day we watched Bronson’s colour turn more yellow as his conjugated bilirubin climbed higher and higher. It was hard to comprehend that Bronson’s tumors were no longer a concern and instead, we were facing another problem, liver failure.

June 27, 2011 is another day I will never forget. That’s the day I was told that Bronson’s liver was past the point of regeneration and he needed a liver transplant. The very next day Bronson’s name was placed on the liver transplant waiting list as a priority 3 (4 is the highest). (If you’re in Ontario and aren’t already an organ donor go here to become one!)

Looking back, I honestly don’t know how I held it all together. Sometimes it felt like every day was a punch in the stomach. How much can one small baby go through? But, every time I thought like that I was reminded that God was with us and he would bring us through. I didn’t know what God’s plan was but I knew that whatever happened was His plan. I was just praying that it would end with me bringing home my baby.

Bronson’s liver failure progressed and he accumulated a lot of fluid (ascites) in his abdomen. They started doing abdominal taps every 4-5 days because the amount of fluid made it hard for him to breathe.

I guess we were blessed that it was a liver that he needed because after a lot of testing my very own sister was the perfect match and was quickly cleared to undergo surgery to donate a lobe of her liver to Bronson.

There are a lot of dates that stick out in my mind but, July 22, 2012 is special because that’s the day that Bronson received his new liver. Only 2.5 months old and he was already a cancer survivor and a transplant recipient. I still find it hard to wrap my head around the fact that my sister was able to save my son’s life. I look at her differently now because without her we wouldn’t have Bronson.

One week short of turning four months old we left the hospital with our little baby for the very first time. When we walked out of that hospital it felt like we were beginning to wake up from a bad dream. Every minute that we spent wondering when we would be able to bring home our baby was finally happening.

He will cover you with his feathers,
and under his wings you will find refuge;
his faithfulness will be your shield and rampart.
Psalm 91:4

Two weeks from now we will be celebrating Bronson’s FIRST birthday and to look at him today you would have no idea what he’s been through. He is a happy, healthy little boy who loves to get into anything and everything he can.

There were so many amazing charities and people who helped us out during this time so on May 2, 2012 go to a McDonalds and purchase a BigMac, Happy Meal, or hot McCafe and $1.00 will be donated to a local charity, such as The Ronald McDonald House.

I am participating in the McHappy Day Blogger Program by ShesConnected. A donation in my name was made to Ronald McDonald House Charities Canada in exchange for my participation in this campaign. All opinions are honest and always my own*