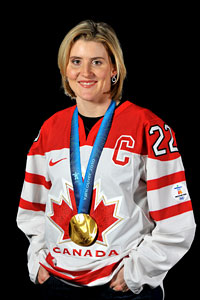 Hayley Wickenheiser has won five Olympic medals over the span of her career. That is only one of the highly impressive milestones in her career – it all started at age 15 when she was chosen for the Canadian Women’s National Team. She’s built up quite the impressive trophy cabinet since then. She has led the team to six gold and one silver medal at the international level, and earned four gold and one silver medal at the Olympic level.
She’s got an impressive track record at the Olympics – she was selected to be the 2014 flag bearer in the Opening Ceremonies, and was also elected to the International Olympic Committee’s Athletes Commission. AND she was one of the top point leaders for the Sochi Olympics.

She made history in January 2003 when she became the first female hockey player to notch a point in a men’s professional game. Sports Illustrated then named her number 20 of 25 Toughest Athletes in the World.

Her talent doesn’t stop at just hockey — she competed in the 2000 Summer Olympics on the Team Canada and worked as a Softball Analyst with CVC’s coverage of the 2008 Beijing Summer Olympics.

Wickenheiser’s passiong for sport is matched by her love of giving back – she has worked with charitable organizations like Right to Play, JumpStart, Project North, and Ovarion Cancer Center.

She started WickFest (or the Wickenheiser Female World Hockey Festival) to build positive female hockey experiences across all levels. 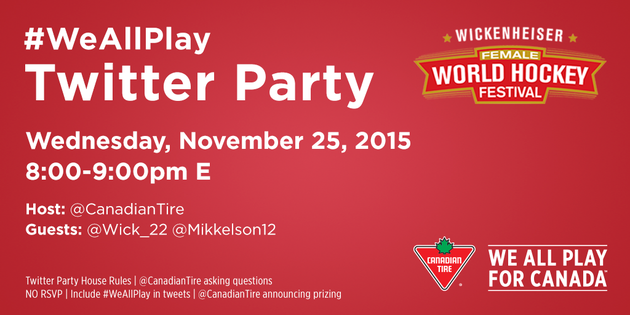 Join us for the #WeAllPlay Twitter Party with Olympians Hayley Wickenheiser and Meaghan Mikkelson.

This is an annual hockey festival set up by Hayley. It draws teams from across Canada for seminars, workshops and a friendly tournament. This year, it takes place in Calgary Nov. 26-29, 2015. The festival is sold out for 2015 with 2,000 female players from 8-18 years old.