I don’t know about you, but as soon as it hits November, I feel like it’s appropriate to string up the lights, hum holiday songs, and drink peppermint lattes.

I think the holiday spirit is in the air now, because already, the streets are getting livelier and the holiday decorations are coming out!

If you’re in Toronto and need a couple of hours to kill, make your way over to Hudson’s Bay and Saks Fifth Avenue! This year, the holiday window displays are truly something else. At Hudson’s bay, observe whimsical woodland creatures celebrating in their winter wonderland. And then see the deliciously glamorous ladies in Sak’s candy fantasyland. This year’s displays are stunning and they have really outdone themselves!

What a launch!  Mariah Carey was in Toronto at the unveiling of both the Husdon’s Bay and Saks Fifth Avenue Holiday Windows. WOW. 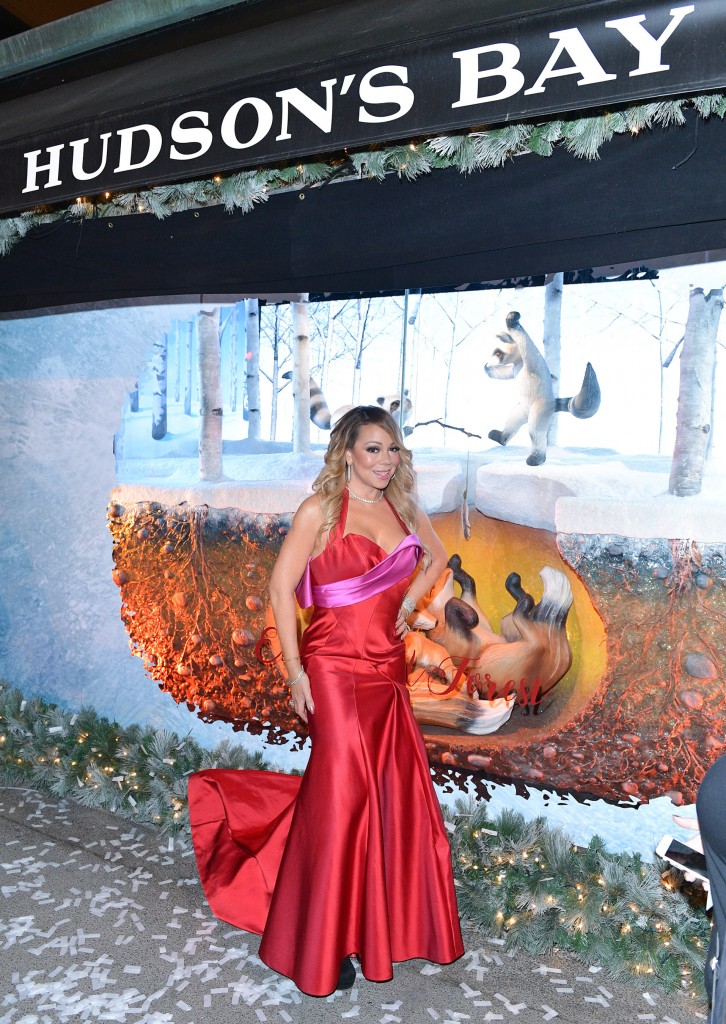 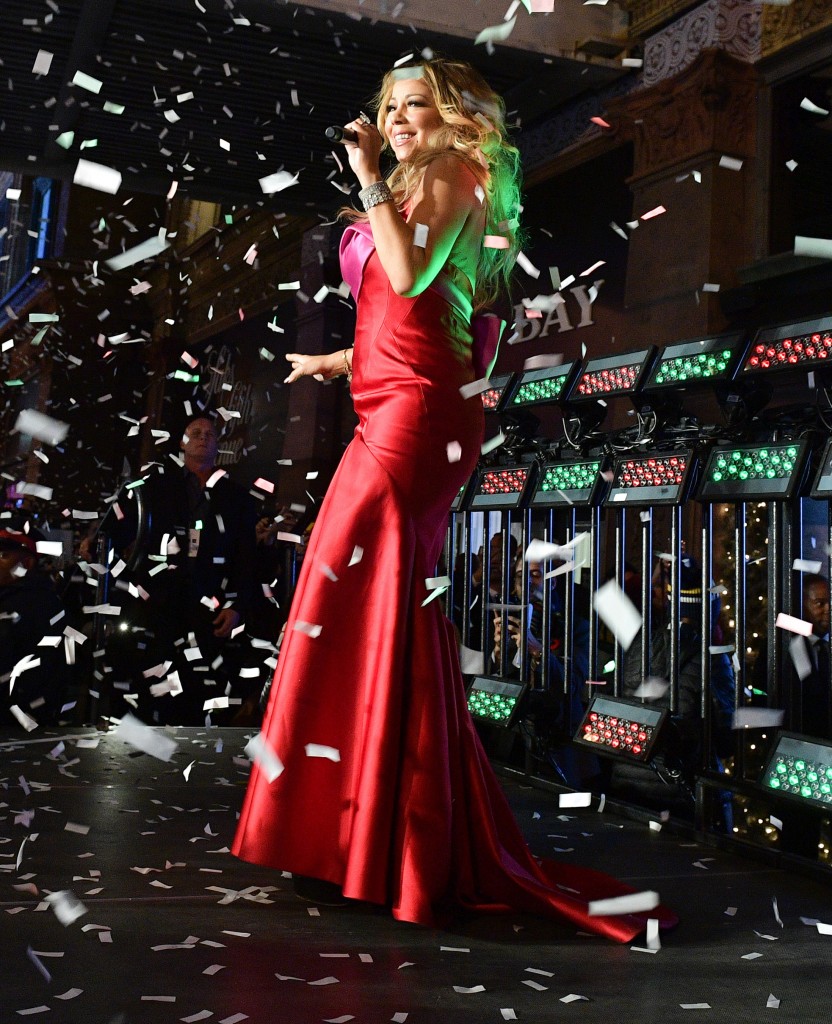 “The holidays are such a magical time in the city,” said Liz Rodbell, President, Hudson’s Bay.  “We know that visiting the windows along Queen Street has been a long-standing tradition for so many Torontonians.  We are thrilled to unveil our five Enchanted Forest windows, which are sure to delight young and old alike.”

Set at various times throughout the day, each of the five windows showcase an imaginative fantasy of how friends and family in the forest spend the holidays.  Bunnies ice-skating on a pond; mice frolicking atop a bear covered in snow, and a mother owl protecting her newborn babies are some of the scenarios passersby will encounter.

Designing and building Hudson’s Bay’s holiday windows was a nine-month process that began in March 2016. A team of 73 people have spent more than 35,360 hours perfecting every detail.

Meticulous attention was paid to each element, with more than 8,150 square feet of brown Kraft paper and 27 gallons of glue used in the creation of the artificial trees alone.  The animals and snow mounds were created from more than 1,300 cubic square feet of foam. 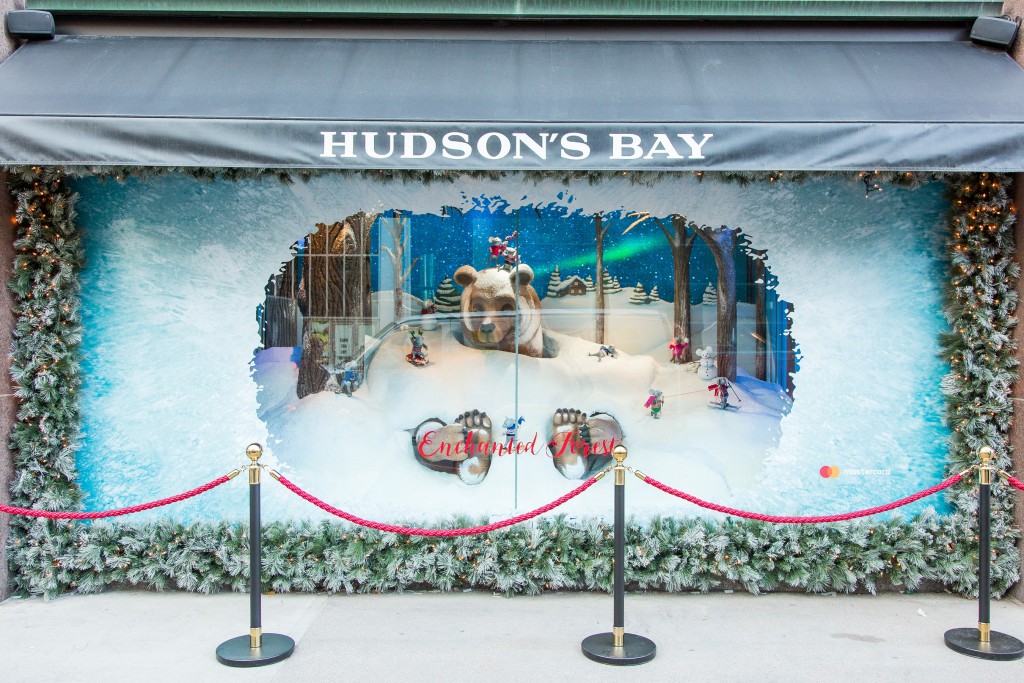 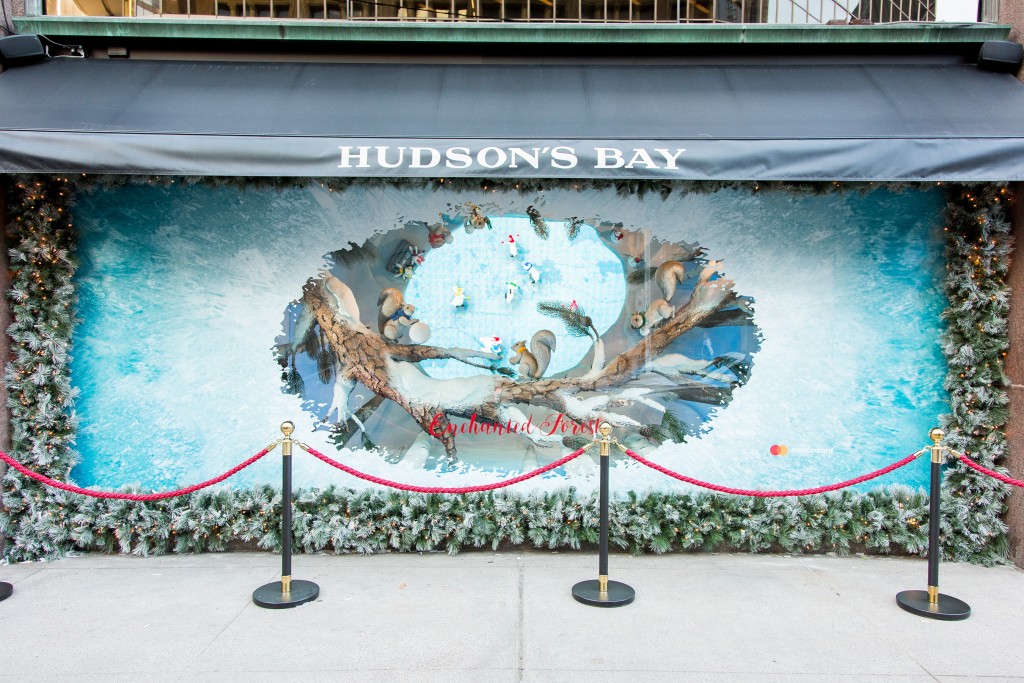 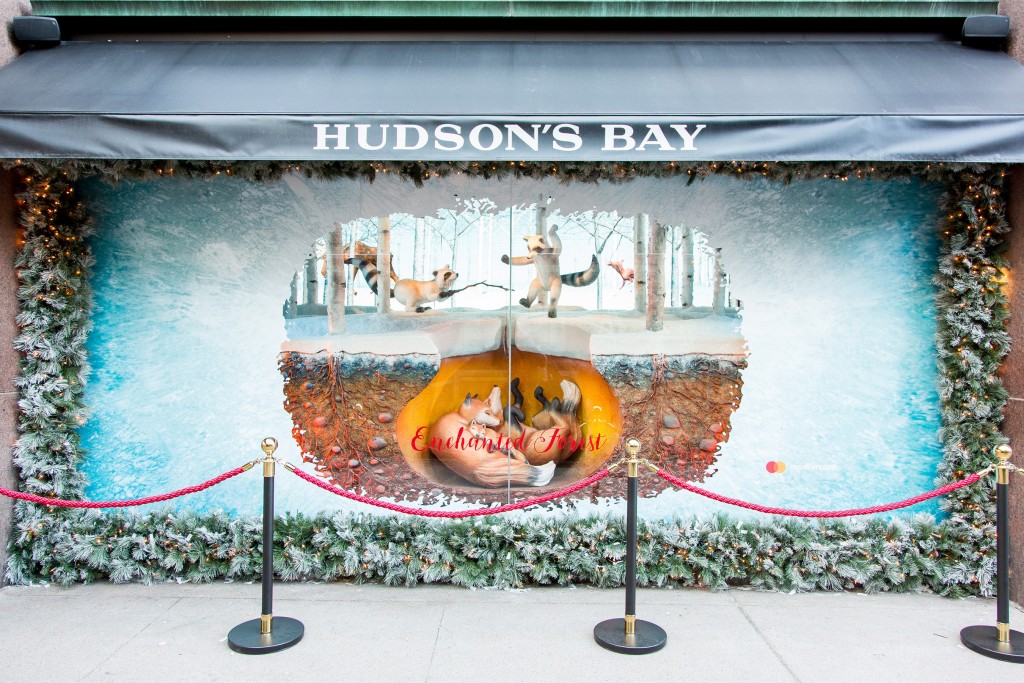 Saks Fifth Avenue’s holiday windows transport viewers to a Land of 1000 Delights, an enchanting landscape of colorful candy and festive fashion. Jumbo swirl lollipops, whipped cotton candy and mounds of rock candy are just some of the delicious décor that will trickle into the store’s windows and visual displays, creating an irresistible destination for fantastical gifts.

Whimsical hair, hats, and shoes complete each look. The music boxes are highlighted by panels of curved colored mirrors and hanging strands of fruit candy and cupcakes.

“We are proud to bring the iconic Saks Fifth Avenue holiday window displays to Canada for the very first time,” said Marc Metrick, president, Saks Fifth Avenue. “The team behind them have created a colorful candy wonderland that we know will charm the city of Toronto this holiday season. We hope to establish as grand a tradition of retail theatre in Canada as we have in New York.” 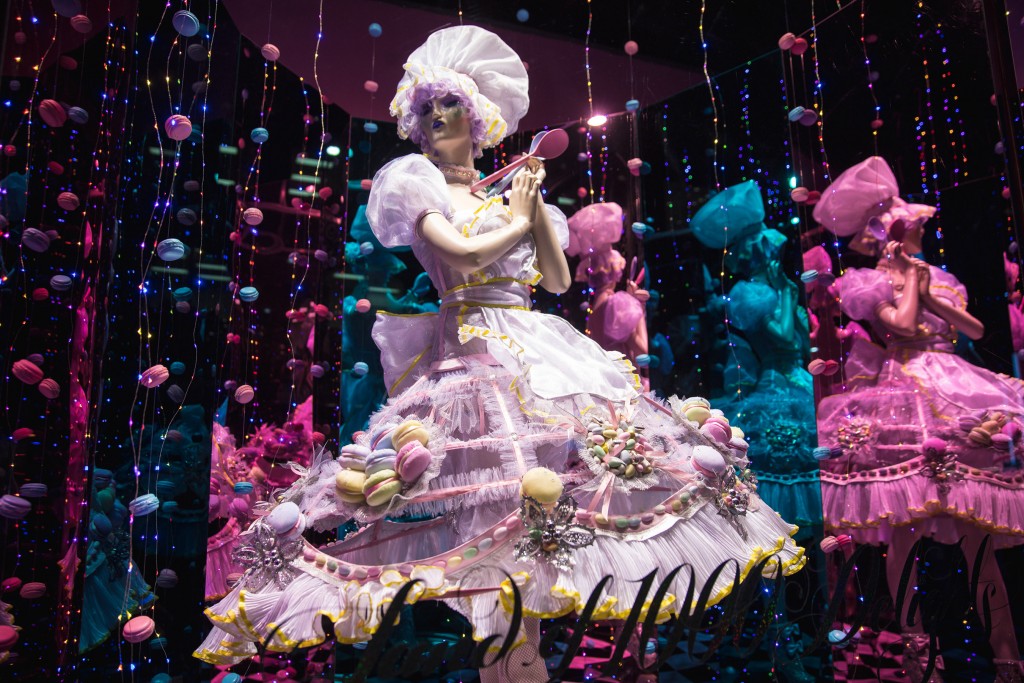 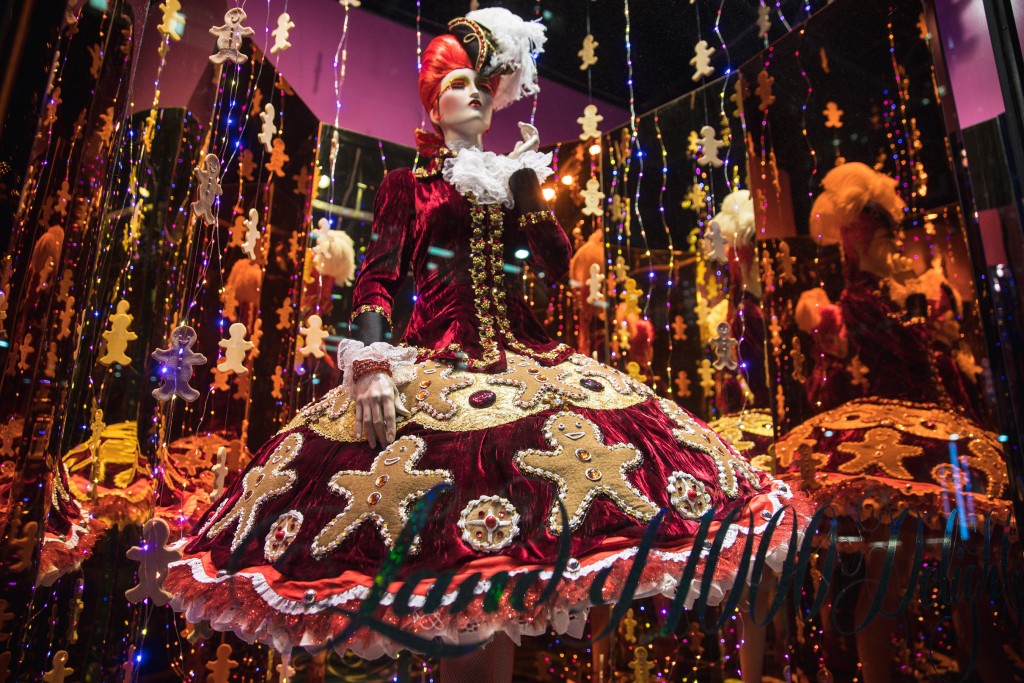 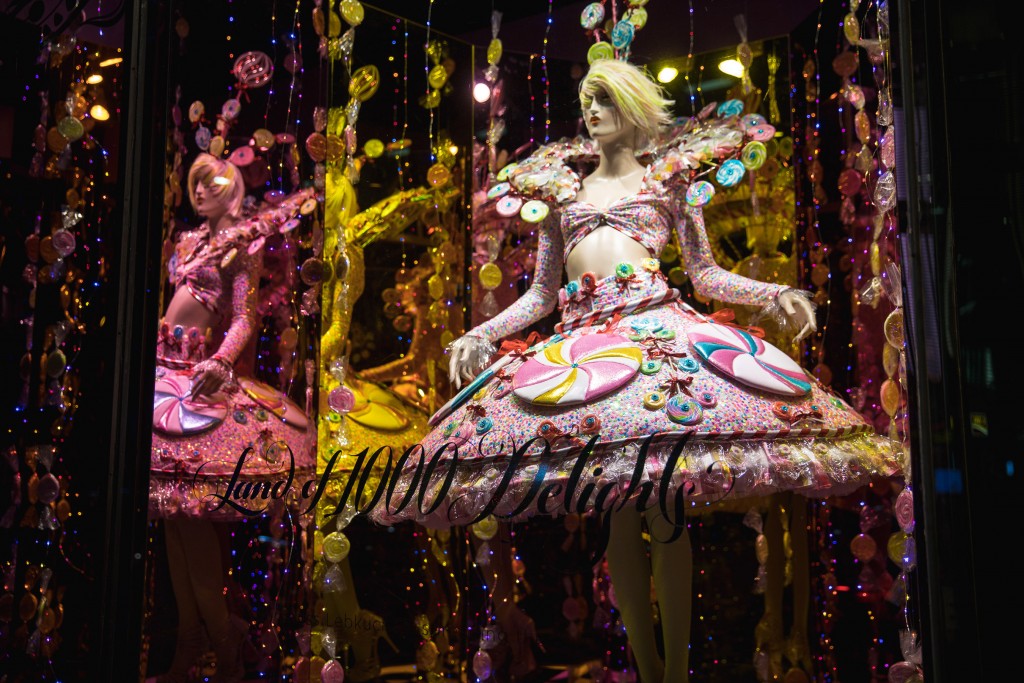 Hudson’s Bay and Saks Fifth Avenue are sure to be a must-visit destination throughout the 2016 holiday season.  The windows will be open from November 3 through to January 3, 2017