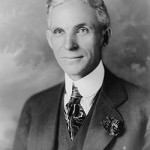 As many of you may know, Ford Motors was founded by Henry Ford (at the ripe age of 40) in 1903 in Detroit.   Little did Henry know that his family run company would be one of the largest family run companies in the world 100 years later. Indeed, he most likely had no idea that consumers would continue to receive so much enjoyment from his inventions 100 years later either.

I test drove a few of the Ford Motors a few weeks ago and was delighted at the company’s commitment for sustainability and safety.  My favorite is the Ford Edge!

However, what I want to share with you is the beauty 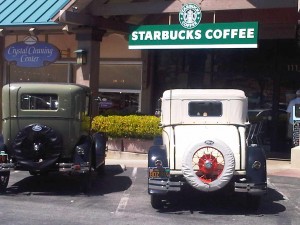 of the original cars (Model A) that I happened upon while frequenting my local Starbucks the other week!   The Ford Model A apparently sold over 2 million cars and was extremely popular, known for its beautiful paintwork, brighter trim and exterior door handles!  I must say that the cars were a gorgeous addition to my usual surroundings and the owners were full of joy and pride. 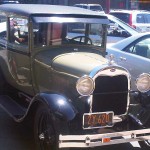 You can read more about Ford’s history through the years at the following websites: