Bell Let’s Talk Day is January 31: You’re invited to get engaged in the world’s biggest

Bell Let’s Talk Day 2018 is set for Wednesday, January 31 and everyone is invited to join the Canadian conversation that’s leading the world in confronting the stigma around mental illness and sharing ideas to move mental health forward. 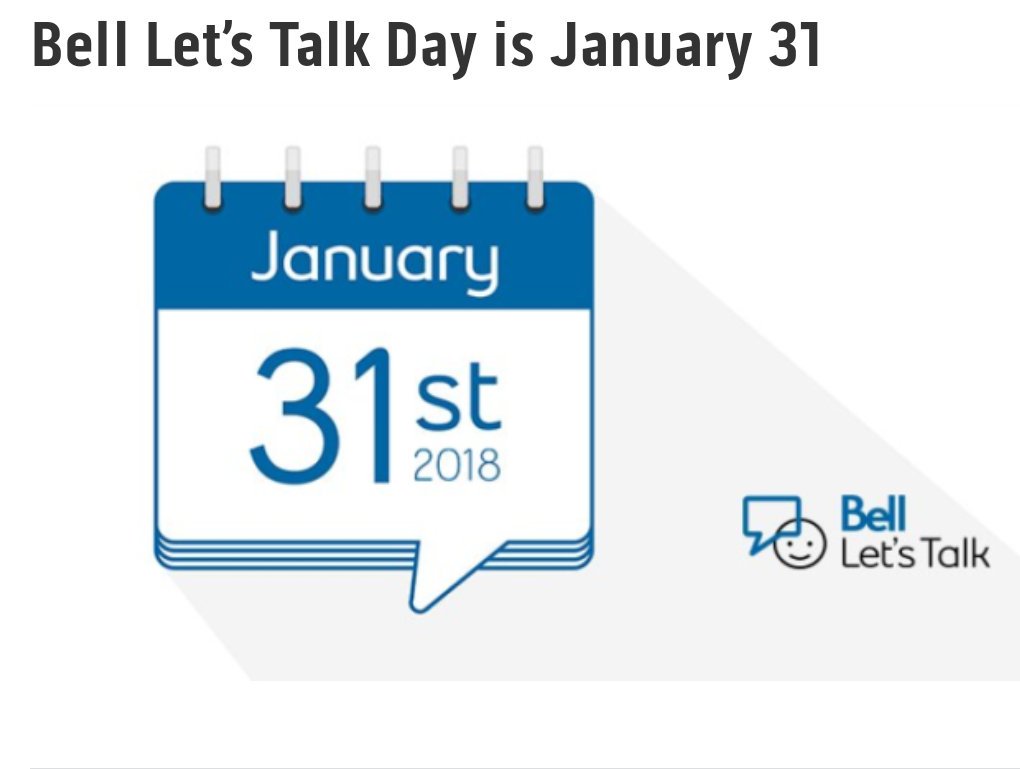 The 2018 Bell Let’s Talk Day awareness campaign spotlights personal stories from Canadians of all ages from all walks of life living with mental illness or providing support for those who do. The TV campaign begins today on sports networks TSN and RDS and continues with the support of multiple Canadian media and other organizations, including television networks; social media and other online platforms, radio and print; billboards and other out-of-home advertising; and in movie theatres with Cineplex, Cinémas Guzzo and the Hot Docs documentary film festival.

“A diverse and dedicated group of Canadians has come together to share their personal stories of struggle, recovery and support with everyone in the country. I thank them for offering their lived experience, encouraging all of us to talk openly about mental illness and how we can all support better mental health for everyone,” said Mary Deacon, Chair of the Bell Let’s Talk initiative. “I would also like to extend our thanks and appreciation to the many media and other organizations across the country supporting the awareness campaign as we look forward to Bell Let’s Talk Day on January 31.”

“I am so happy to join with all the friends of Bell Let’s Talk to share our stories of living with mental illness and the stigma that surrounds it, and work together to encourage everyone to talk about mental health so no one misses out on the care they need,” said Melynda Ehaloak, a mental health advocate in Canada’s North who appears in the campaign. “Through my work with youth in Nunavut, I see every day just how important it is to keep talking so that we can help young people living with mental health issues.”

“As someone who lives with mental illness, I’ve been fortunate to have the support of Bell Let’s Talk here in the workplace and also as a volunteer advocate for mental health,” said Leanne Simpson, a Bell employee and CAMH Engage volunteer with the Centre for Mental Health and Addiction Foundation. “It’s really a privilege for me to be able to share the story of my own experience as part of this great group of Canadians that has come together for Bell Let’s Talk Day.”

Join the conversation on Bell Let’s Talk Day
On Bell Let’s Talk Day, millions of people in Canada and around the world send messages of support and encouragement for those struggling with mental illness, share their own stories and offer ideas about how we can improve everyone’s mental health.

Bell will donate 5 cents to Canadian mental health programs for each of these interactions on January 31, at no extra cost to participants:

Since launching in 2010, Bell Let’s Talk has supported organizations providing mental health care and services in every region of Canada. Focused on 4 key action pillars – anti-stigma, care and access, research and workplace leadership – Bell Let’s Talk programs include major donations to hospitals, universities and other care and research organizations across Canada and these dedicated programs: the Bell Let’s Talk Community Fund for local community mental health organizations; the Bell True Patriot Love Fund for military members, veterans and their families; a fund supporting mental health care in Canada’s Territories; and most recently a new fund dedicated to Indigenous mental health in Manitoba, launched alongside the creation of Bell MTS with a donation to Winnipeg’s Ma Mawi Wi Chi Itata Centre.